When El Niño storms hit Peru in 2017, the rains, landslides, and floods ravaged homes across eleven districts in the northwestern coastal city of Trujillo, affecting thousands of lives. That’s just a microcosm of the damage done across the country. Much of the vital infrastructure people rely on, including schools and hospitals, took a massive toll, with total damages estimated to several billion pounds.

Through cost and project management expertise, Gleeds is helping Peru’s government build back better and save lives. Working with a UK Delivery Team (UKDT) – a joint venture of UK consultancies including Gleeds, Mace, and Arup – our experts are supporting the Authority for Reconstruction with Changes on a $3bn reconstruction programme spanning 15 packages of works for 74 schools, 15 health centres, and flood protection schemes.

Our team recently visited several project sites to report on progress across Piura and Trujillo.

Within northwest Peru’s Sechura Desert, Piura took one of the hardest hits from El Nino. Like many of the towns affected, it hosts largely remote and underdeveloped areas, making the infrastructure projects all the more essential.

“It’s a mix of reconstruction and renovation works. Some schools and hospitals are being refurbished, some are receiving interventions, and others are being completely done from scratch,” said Sean Watson, Executive Information Manager, Infrastructure, at Gleeds. “People rely on these services and the work being done under the Government-to-Government agreement with the UK will greatly improve quality of life in the region.” 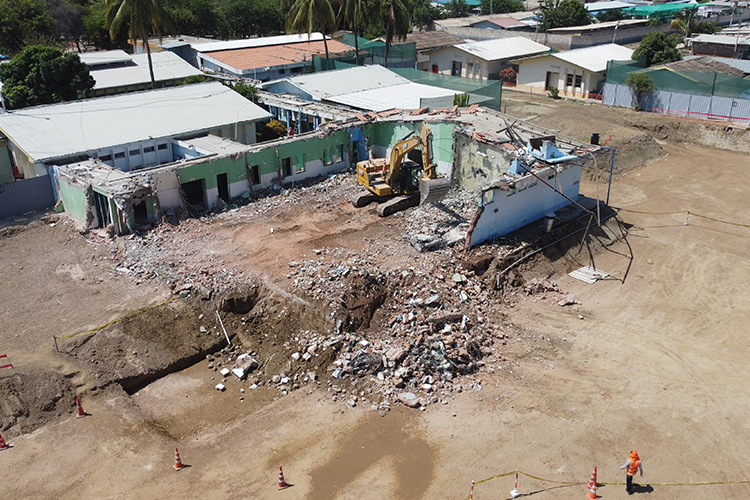 For reconstruction to succeed, the UKDT is bridging gaps between the technical and delivery teams by encouraging greater consistency, collaboration, and clarity on processes. That has involved introducing quality management practices and implementing ISO 19650 principles – a standard for information management – to streamline collection and storage of information surrounding the lifecycle of assets.

“We’re dealing with people at different levels of understanding, particularly of what information management means, so you have to appreciate that and standardise processes for things like data collection to allow more effective and cost-efficient decision making,” said Sean. “In any country or project, people have different skills and interests, so you have to find ways to appeal to people’s interests in promoting better ways of working.”

One of the ways the team has promoted efficiency is by introducing digitised practices like design management and cloud collaboration during the design process. In the larger infrastructure and river works, a Geographic Information System (GIS) platform has helped visualise and capture assets at a programme level. With a wealth of information from on-site photography to desktop flood studies, the platform is just one of the tools supporting greater transparency and understanding between the people responsible for executing the project.

The adoption of international Building Information Modelling (BIM) standards, too, has involved a significant cultural change for all local organisations involved. The platform has heavily streamlined how individual projects are built, with one resulting intervention being the addition of natural ventilation in an existing school in Piura.

“We’re aiming to use BIM to create an asset information model that supports the whole lifecycle of the assets,” said Mike Penny, Peru Country Manager, Infrastructure, at Gleeds. “Peru is very early in the process of adopting BIM, but it’s going to have enormous long-term benefits. Already now, BIM is allowing pre-defined layouts to be applied in an almost modular way to each of the buildings. That massively speeds up and streamlines the design process.”

To further speed up delivery, our team has set up a Digital Project Management Office, featuring a centralised data base, simplified data entry, and greatly improved visualisation of data analysis to aid reporting.

As important as schools and hospitals are, they’re no use if another flood destroys them. The sobering reality of the destruction wrought by 2017’s El Nino became clear to our team while visiting sites in Trujillo with the UKDT.

At the Buenos Aires district’s stone sea wall, playgrounds and pitch fields once in use are faded memories and city drainage is lower than sea level. Over at San Ildefonso and the San Carlos River, our team compared videos of the El Niño floods with the vast, rugged landscape before them. 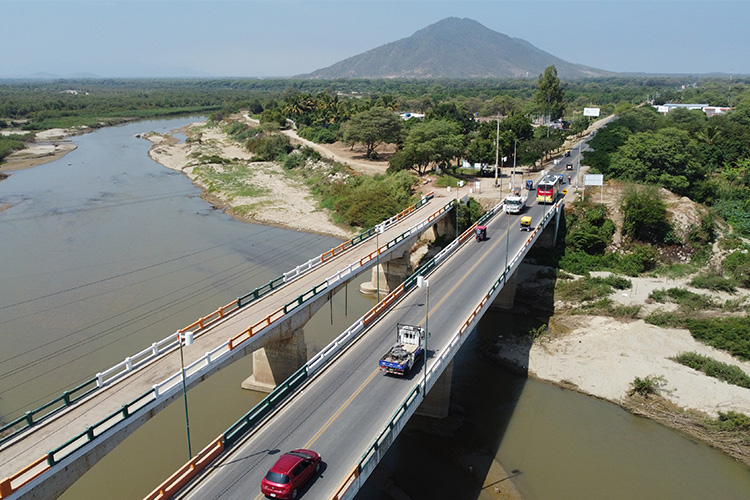 “The effect was humbling and brought a fresh vigour to our outlook and drive to deliver the project,” said Dean Purvis, Global Head of Infrastructure at Gleeds.

To protect Peru’s people, as well as new and existing infrastructure, the reconstruction investment is funding integrated solutions to futureproof defences, including river treatments, early warning systems, dams, and gullies.

The UKDT’s design team is reviewing how the city drainage water can outfall to the Pacific, while Gleeds’ team reviews options for mitigating use and quantity of pumping stations whose maintenance incurs high whole-life cost.

The San Ildefonso gully had two existing stone dikes built after El Niño in late 1990’s – both demolished by the 2017 flood, which let large stones, boulders, and sediment into the city drainage, causing immense damage. To remedy this, new dikes will be installed up the gully to ease water flow and capture sediment before it reaches the city boundary. Water will be channelled safely into a canal to control flow into the River Moche. A similar project is being carried out at the San Carlos gully, an important agricultural area for sugar cane.

“The contract for the San Ildefonso and San Carlos streams has already been signed, and the idea [of this trip] is that some of the opportunities for improvement that are being found, with the corresponding analysis, can be incorporated into the design stage,” said Alberto Marquina, technical lead for the Integrated Solutions sector with ARCC.

With construction commencing in Autumn 2021, our experts are liaising directly with their Peruvian counterparts to transfer as much knowledge as possible.

“What we’re doing with the UK Delivery Team is leaving behind a legacy,” said Mike Penny. “We’re not just diving in there, doing the job, then leaving. We’re embedding skills and creating sustainable practices for local teams to continue delivering infrastructure and maintaining flood systems.” 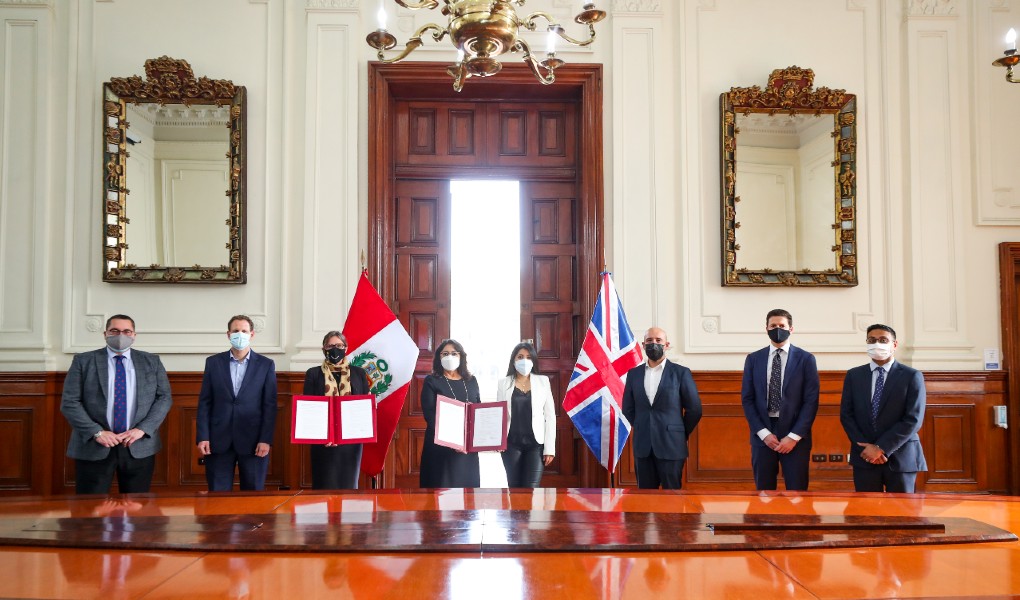 Much of the success behind this collaboration is owed to the UKDT being directly deployed to the Piura and Trujillo hubs, giving local teams immediate access to our project management and delivery specialists. That direct line of communication has sped up resolution to many logistical challenges, particularly in Peru’s more remote areas.

That learning and knowledge sharing works the other way around as well, Mike added.

“Our team at Gleeds is learning so much from this experience that will be applied to many of our other projects around the globe. The people who travel abroad to experience different cultures and working environments frequently come back to their host country in a very different place in terms of capability and perspective. We’ve often seen it act as an accelerant for their career progression.”

Our team will continue to liaise with stakeholders, including local government officials, to discuss expectations and resolve concerns regarding the projects.

Alberto Marquina said: “We want to share our findings and learn about their expectations to ensure that these proposals are not isolated but have been coordinated with all stakeholders. We have also planned a series of meetings with local and provincial authorities, as well as with different social actors.”

The Climate Conversation | Acc..
Are we laying the right tracks..
Gleeds Ukraine awarded ISO 900..
Gleeds and Mace to lead consor..